by Hastings Of Malawi 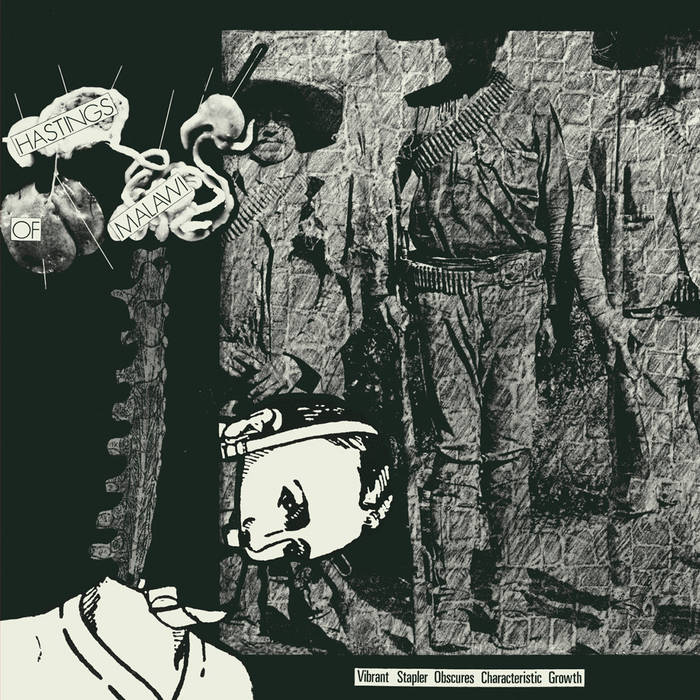 A classic masterpiece from 1981, never re-released before. Originally 1000 copies pressed on orange/red vinyl. 120 copies were sold through Rough Trade and Virgin Records. 800 copies were bought and later destroyed by the United Dairies label, makin this record even more rare.

They recorded the album in one night in 1981 with no plan and no idea of what they were doing.

They played drums, clarinet, synthesiser and piano but also made use of things that they found lying around the studio – old records, cookery books, telephone directories and a telephone.

The recordings were played down the phone to randomly dialled numbers and the reactions added to the recording.

All three had been involved in the recording of the first Nurse with Wound album Chance Meeting On A Dissecting Table Of A Sewing Machine And An Umbrella and had contributedmetal scrapings, piano, effects, clarinet and guitar during the session.

The album was released in 1981 as Vibrant Stapler Obscures Characteristic Growth by Hastings of Malawi on the Papal Products label.

The star of the record is Pat Simmons who was the voice of the UK speaking clock between 1963 and 1984.

In his book Lipstick Traces writer Greil Marcus seeks to draw a line from Dada through the Situationist International to punk rock. If this line exists then this record sits on the end of it.

Good or bad are not concepts that can be applied to this recording.

The record stands firmly in opposition to the now all pervading concepts of commercialisation, celebrity culture and the commodification of creative activity.

Bandcamp Daily  your guide to the world of Bandcamp

Featuring interviews with the mighty Hiatus Kaiyote and genre-busting L'Rain.